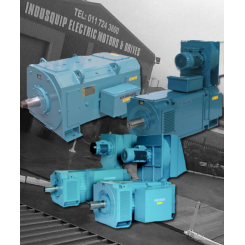 1894: Odense, Denmark. Thomas B. THRIGE, an apprentice of Thomas EDISON who started the General Electric Corp, founded his business to exploit the many possibilities of electricity as a driving force in industry, trades and agriculture.

1926: In response to increasing volumes of export, Thomas B. Thrige establishes his first sales office abroad which is in London.

1964: Schneider and Westinghouse make an accord with EVE and NOISET and form Enco whose production is based at Nogent-sur-Seine, France.

1965: Thrige merges with its largest competitor Titan to become Thrige Titan with its head offices based in Odense, Denmark.

1967: The Swedish company ASEA buys a 40% share in Thrige Titan and a worldwide co-operation is established for production, sales and marketing.

1979: The Thomas B. Thrige Foundation takes over the ASEA share holding to maintain the independence of the Danish company Thrige Titan.

1982: Thrige Electric company is Odense is formed to handle the manufacture of DC motors within the Thrige Titan group.

1982: Enco becomes a partner of Thrige Electric and is the exclusive distributor in France.

1985: Thrige Electric acquires the Enco company in Nogent, France which is rebaptised to Thrige Enco.

1992: Thrige Electric confides the manufacture of the LAK and Uniqore range of motors to Thrige Enco.

1998: Thrige Electric acquires the ABB DC motor factory in France and move their production from Nogent to Persan also in France.

2002: The Thomas B. Thrige Foundation stops all commercial activities and Thrige Electric is sold to a private investor.

2004: Thrige Electric acquires the Persan branch of DMS, formerly ABB Service, the experts in preventive maintenance and repairs of all types of motors.

2008: In order to meet the increasing demands and needs of the customer, T-T Electric continues the expansion of its product range with the launch of the new AMP AC square motor collection.

Enquire about this product
Product Downloads